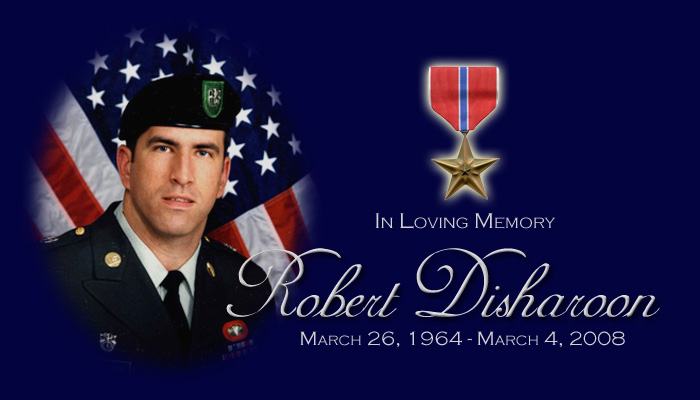 If ever God created a gentle giant with a heart of gold and soul to match, it came to life in Robert Charles Disharoon, my little brother, Bob. He proved the experts wrong his whole life.

They said he wasn’t supposed to be here. Born eight years after me, after Mom and Dad had two beautiful little blonde girls and then me, they thought they were finished creating their family. Several months into her unknown pregnancy, Mom was told she had a tumor. Three months premature, mom gave birth to a tumor named Bob. They said he wouldn’t be born…they were wrong.

Well he WAS born …. The 26th of March 1964, three months premature, 22 inches long and weighing a whopping 3.9 lbs. Dad described him as looking like a rolled up newspaper. His digestive system wasn’t fully developed and he spent the first few months in the hospital. The first few years of his life he spent in and out of hospitals, first getting operations on his digestive system, and then receiving several eye operations. They said he wasn’t supposed to live…they were wrong.

The day I graduated from high school, he moved with Mom and Dad (who was recently retired at the old age of 52) to Pompano Beach, Florida. They lived in an adult-only condominium complex at the Island Club and Bob grew to be Dad’s best friend. Dad often said “they grew up together”. Once, during the course of an interview for a high school scholarship award, the teacher recognized his home address and questioned how he got away with living there. Bob replied, “I hid a lot.” They said he wasn’t supposed to be there…they were wrong.

Bob spent his childhood dreaming of flying planes. His room was filled with model airplanes suspended from his ceiling. He went to college at his beloved University of Florida and joined the ROTC in hopes of becoming a pilot, but because of his childhood health issues, he couldn’t pass the eye test. Figuring that if he couldn’t fly planes, he would jump out them, he joined the Army to be Airborne. They said he wasn’t supposed to be a soldier…they were wrong.

After a stint in the regular Army, he reenlisted to become a member of the Army Special Forces. Although he never spoke much about his experiences, we would hear little snippets from some of his friends. Like the story of one of the last days of training when his Team had to carry a telephone pole back up a hill. When the Team was on the verge of not making it, “the big hairy man” apparently was instrumental in getting that pole up the hill. Likewise, during all his years as a member of the Special Forces, he never talked about his deployments. To put his family at ease he would only talk about the funny side of his Army life. He would joke about the local civilians having to swap out the batteries of their makeshift ‘assault vehicles’ out in the open streets when our embassy was under siege in Liberia. Long after Bob returned home from one of his many deployments to Afghanistan, Louise came across a little trinket in his desk drawer. When she asked “Bob, what’s this?” he replied, “It’s just something they gave me at work.” His little something, the Bronze Star, now hangs on his wall instead of stuffed in a drawer. They said he wasn’t supposed to make it home…they were wrong.

On the home front, he built his nest. He found the love of his life in Louise. They opened up their home and their hearts to give Michael a loving home and a life filled with hope, promise, and an unlimited future. Bob loved everything Disney, everything Tigger, everything Bugs Bunny. He could recite entire Foghorn Leghorn cartoon sequences better than Mel Blanc. They said he wouldn’t be a father…they were wrong.

They say he died. Once again, they’ve underestimated him. One day, the tears I’ve been crying for him will dry and I’ll remember his sense of humor, his jokes, his kindness, his compassion, his love for family and friends, not to mention his love for his Army brothers and his country. It will be hard at first, but it will come. I’ll smile again, not because I have forgotten him, but because he will continue to breathe life in me and everyone he loves, every day. I will choose to celebrate his life and not mourn his latest deployment to yet another faraway place.

They said he died? They don’t know Bob. Now it’s up to us to prove them wrong.